Closed military base brings people together in a vibrant new community

When the Fort Benjamin Harrison military base closed in 1991, it left 125 vacant buildings and a swath of the City of Lawrence in Marion County lifeless.

A market analysis of a two-mile radius showed that there were almost as many deer as people.

“Lawrence was a place to drive through, not to,” says Tom Crouch, steering committee member to open the Benjamin Harrison YMCA and treasurer for the Ft. Harrison Re-use Authority at the time. “It was no destination, and there was no downtown. You couldn’t buy a shirt.”

A long-time friend and steward of the Y, Crouch serves on the YMCA of Greater Indianapolis board of directors and the advisory board for Benjamin Harrison YMCA today. He was the state chairman for the YMCA from 1991-1996 and served on board of directors for Y-USA. An avid athlete, he has biked across the U.S.

Crouch and other Y enthusiasts recently celebrated the milestone and Changing Lives for 20 Years at the YMCA’s annual Summer Bash at The Garrison.

Tasked to redevelop and revitalize an area with deep historic significance, the Benjamin Harrison YMCA was a collaboration of the Ft. Harrison Re-use Authority, YMCA of Greater Indianapolis and the City of Lawrence.

Community and business leaders and all levels of government from both parties—then Indy Mayor Stephen Goldsmith, Governor Evan Bayh, Senator Dan Coats, and countless others—worked together to plan and gain support for the project, which has since transformed the area into a thriving neighborhood.

A subcommittee created a five-year interim plan to address what to do with the Fort, which eventually led to the development of the Fort Benjamin State Park, Fort Golf Resort, 56th St. extension and a host of other amenities and improvements.

“We were trying to build something for the community,” says Crouch. “We moved everyone outside the box toward new ways of thinking. Before this, the YMCA in Indianapolis was mainly concentrated on survival.”

There had been no new YMCAs built in Central Indiana since 1959, around the time when the Ransburg, Jordan and Baxter YMCAs opened. Conversely, more than six YMCAs have opened in Greater Indianapolis this decade alone, with a new one in Pike Township on the way. 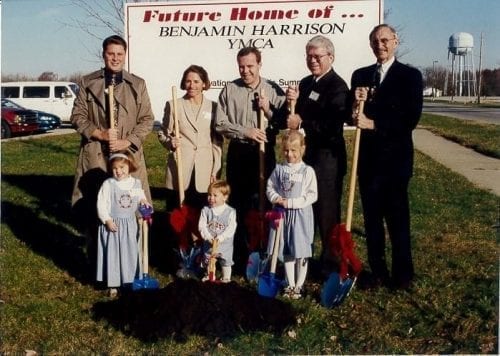 The Ft. Ben project opened up the Geist area. You could now drive through Lawrence to get to Winding Ridge and other neighborhoods and stores.

“Ft. Harrison acted like a fence between affluent people living to the north and less advantaged people to the south. The Y broke down that fence. Rich and poor could come to the same building,” said Crouch. “We built a new community and the Y was a part of it.”

Family dynamics were changing at the time as well. There was a greater need for services. As is its tradition, the Y forged partnerships with schools, churches and other organizations, which continue today. Just this summer, the Benjamin Harrison YMCA offered day camp at two nearby schools.

Crouch brought Lou Gerig on to help open the Y. Gerig remembers, “Tom was persistent. He knew the area could be a destination. We took it one step at a time, and we weren’t beholden to our history.”

Gerig remains involved today, serving on the emeritus board of directors for the Benjamin Harrison YMCA.

Crouch remembers the constraints they faced, “We had no money and had to sell things fast.”

Despite being dubbed some of the best examples of temporary housing made during World War II by state historic preservation officers, the old white “barrack” buildings had to be torn down, but the brick ones were able to be saved. New buildings have been built to complement the remaining brick structures.

Ft. Ben is still known as one of the best base closures in our country’s history.

“This put Lawrence on the map,” says Crouch. “There was no way we would have thought this would evolve as it has. It was all brand new.”

The Lawrence population has grown from 27,000 when the base closed in 1991 to nearly 48,000 today and was one the fastest growing school systems in the state last year.

Tom is also proud of the Y’s programs to address health disparities, such as the Diabetes prevention and LIVESTRONG® programs. “Everyone works together. There’s a nice feeling of community.”

The Benjamin Harrison YMCA has flourished since opening in 1997 and today serves 14,000 members. It continues to be a social, economic and health engine for both cities. The Lawrence community has raised nearly $2 million of the $9 million invested in facility improvements, including recent upgrades to the lobby and new scoreboards in the gymnasium. United Way recently awarded a $74,000 grant to renovate the Play and Learn and preschool rooms.

All about the community

Families of deployed service men and women are eligible for free memberships, and reduced rates are available for veterans. A single-parent military servicewoman who uses Y child care and sports programming explains to Burgess, “The YMCA is my support system.”

Military veterans were recognized at the Summer Bash, which raised another $75,000 and was a wonderful celebration of the whole community’s success. 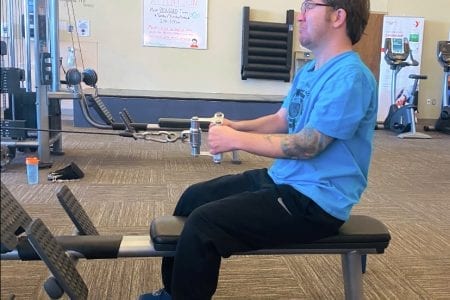 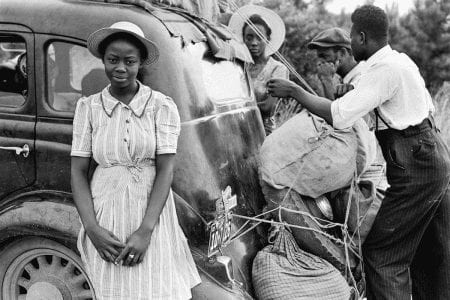