Bright young man volunteers at Teen Nights while he recovers

Choosing the path to success

Kianté Lee is a young man who is very conscientious about his education and future—he wants to have the best start to his life as possible. He is also a young man with Transverse Myelitis.

Initially, he walked through the doors of the Benjamin Harrison YMCA as a way to occupy his time and to ensure he had the right support system to help him stay out of trouble. But what he found exceeded his expectations. 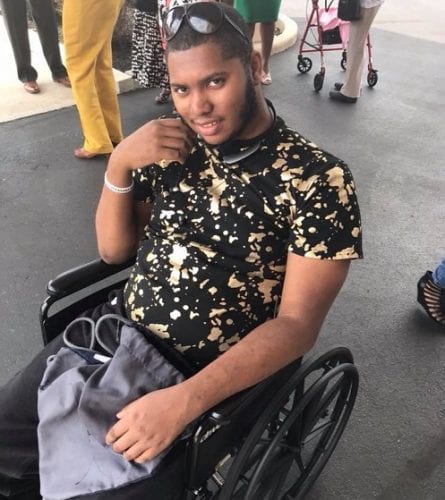 Kianté joined the YMCA’s Teen Nights, a regularly scheduled night for young people to make new friends, learn new things, or just socialize around themed activities like music, basketball, swimming, dodgeball, or cooking. It was through Teen Nights that Kianté discovered his love for civic involvement.

In Indiana YMCA Youth and Government (INYaG), Kianté learned about the American democratic process by participating and training tailored to students in grades 7 through 12, in the theory and practice of the Indiana state government. In INYaG, he strengthened his critical thinking and analytical ability as well as developed a greater awareness of social issues and potential solutions.

INYaG as well as volunteering at the Y opened doors for Kianté. Not only did he handily graduate high school, he was accepted into college and moved to Terre Haute to eagerly begin the next chapter of his journey.

That is when tragedy struck. Kianté ended up in the emergency room in the spring of 2017.

Leading up to being hospitalized, Kianté hadn’t been feeling well. He experienced baffling weakness in his arms and legs. The tips of his fingers and his toes were often numb or tingled. This discomfort eventually increased and became pain. His mobility decreased significantly.

Kianté slipped into a coma. It took months of testing before his doctors finally figured out what was happening. He was diagnosed with Transverse Myelitis (TM), a disorder caused by inflammation of the spinal cord. The cause of TM is reportedly unknown in 60 percent of cases, but in the remaining 40 percent, the disease is often associated with autoimmune disorders.

When Kianté woke up from his coma, he was unable to walk.

There are several ways to treat Transverse Myelitis, including through medication, plasma exchanging therapy and physical therapy.

Kianté ended up moving back to Indianapolis in order to undergo months of therapy. He is still optimistic about his future, as most people with TM experience at least partial recovery, though recovery can take more than a year.

“I have had to overcome so many obstacles,” Kianté said. “I have been going through therapy and have high hopes that I will walk again.”

He is now back to volunteering at Teen Night while he continues his therapy and treatment for Transverse Myelitis. He hopes that he can positively influence others, in the same program that gave him hope as a young teen.

To continue programs that help people like Kianté in need of support, make an contribution to the YMCA’s annual campaign.