Cheryl joined the YMCA at the City Market YMCA over a year ago to get back into her love of health and fitness. Soon after she restarted her fitness routine, she suffered a knee injury. Cheryl thought that she would bounce back and be back at the Y after a couple of days, but the injury never got better. It became extremely hard for Cheryl to bend her knees to perform every day activities, such as squatting down.

After making some visits with her doctor, he recommended that she try some lunch time classes to get her back moving around more efficiently again. Cheryl took the doctor’s advice and began taking classes such as “Circuit Training” and Les Mills BodyPump Express. Slowly but surely, Cheryl was seeing improvements in her mobility. Every week she was needing less modifications for lower body exercises. She was feeling stronger than ever, and even influenced her other co-workers to come workout with her to help improve themselves as well.

Now-a-days, Cheryl is breaking her personal records with her weights, being able to fully squat in BodyPump Express, and being able to perform other lower body exercises, such as lunges. Cheryl talks about how the Y has influenced her health in fitness in such a way that she says she feels “naked” without it. She also states how much stronger she’s felt in the past year since coming back to the Y. The advice she gives to people who are unsure about beginning their fitness journey is to “just come in and do something, even if it’s just a little bit. Be present and soon you will realize that it was all worth it.” 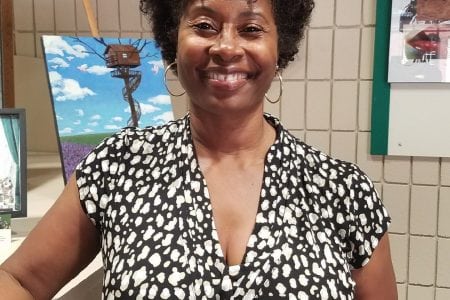