“Remaining Awake through a Revolution”

Although Dr. Martin Luther King Jr. has been deceased for almost 53 years, his positive influence still ripples through the tides of life at the Y and all over the world.

Dr. Martin Luther King Jr. feet of influence have trod the hallways at the Y both physically and sentimentally. Words from his speeches have been recited by children of all ages at day camps, youth programs and other events all over the world.

Before he won the Nobel Peace prize, before he delivered his world-changing “I have a dream” speech and before he became an ordained pastor Martin Luther King, Jr. was just another kid at the Y.

Remaining Awake through a Revolution 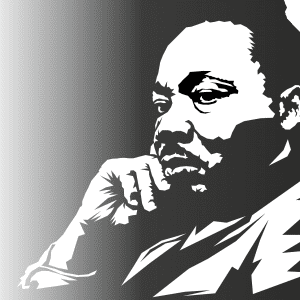 In 1958 at the Senate Avenue YMCA in downtown Indianapolis, Martin Luther King Jr. made an appearance on the Monster Meeting roster with a speech entitled “Remaining Awake through a Revolution.”

Due to intense interest in King’s lecture, organizers moved the event to Cadle Tabernacle, which could accommodate a larger audience. An estimated 4,000 people attended the rousing speech that focused on the struggle for equality.

In this speech, Dr. King talked about Rip Van Winkle. He revealed that “the most striking thing about the story of Rip Van Winkle is not merely that Rip slept twenty years, but that he slept through a revolution. While he was peacefully snoring up in the mountain a revolution was taking place that at points would change the course of history—and Rip knew nothing about it.

He was asleep. Yes, he slept through a revolution. And one of the great liabilities of life is that all too many people find themselves living amid a great period of social change, and yet they fail to develop the new attitudes, the new mental responses, that the new situation demands. They end up sleeping through a revolution.”

The words of Dr. Martin Luther King’s speech seem especially relevant today when the political divide and social unrest seem to be at an all-time high. Mother earth seems to be crying out for unity, compassion and an empathetic ear of understanding.

No individual can live alone

The crux of the speech is captured in the following words. “…we are challenged to develop a world perspective. No individual can live alone, no nation can live alone, and anyone who feels that he can live alone is sleeping through a revolution. The world in which we live is geographically one. The challenge that we face today is to make it one in terms of brotherhood.”

The mission of the YMCA is to put Christian principles into practice through programs that build healthy spirit, mind, and body for all. We strive to make his vision an everyday practice. We want to lead in challenging the current world perspective and make the YMCA a place where the community can come together. We also want to make the YMCA a place where every person and family feels welcome to participate in all of our programs. The calling of Dr. King’s message here – as it was throughout his legacy is clear. We must come together in harmony.

If there’s any question as to what coming together in harmony means, hear the words of Martin Luther King to explain. “We must all learn to live together as brothers or we will all perish together as fools. We are tied together in the single garment of destiny, caught in an inescapable network of mutuality. And whatever affects one directly affects all indirectly.”

Learn more about how to make that happen with the MLK TOOLKIT.