On July 12 a flashbang exploded in the parking lot between the Fishers YMCA and Indy Fuel Tank.

“This is the Fishers Police Department! We have a warrant for your arrest. Come out now with your hands up!”

There were no crimes committed or any criminals to be found on the property.

So, what was the purpose of the intense display by the Fishers Police?

The demonstration was just part of a five-day program called The Fishers Teen Police Academy. The program, in its twentieth year this summer, was instituted by Chief of Police, Ed Gebhart, to strengthen the relationship between the community and the department. Officers teach or demonstrate their roles and responsibilities as members of the FPD, even providing hands-on experiences and insight into a few specialized units and skills.

This year the Academy took place from July 11-15 from 9 a.m. to 3:30 p.m. Thirty-two teenagers, enrolled in Hamilton Southeastern Junior or Senior High School for the fall semester, underwent background checks to sign up for the program. Throughout the week, the school district allowed the officers and teens to use the Riverside Intermediate School building. But one day, out of the five, there was a bit of a change in the routine: the students came to the Fishers YMCA.

On the morning of Tuesday, July 12, Major Mike Janes, one of eight School Resource Officers, stood outside before the teens to discuss how the FPD’s Dive Team operates. The group then moved from a theoretical to a tactical focus. Every student who was inclined to do so stepped into official dive shoes, and dry suits, and put on masks to “dive” into the indoor pool. A handful of dive specialists instructed the students throughout the process.

Lieutenant Andy Burks says “… We can do a lot of stuff within the school – canine demos and some other stuff – but when it comes to diving, you can’t necessarily do a dive demo in a gym at school.”

Lt. Burks has been a part of the Student Resource Officer unit since 2017. He says that partnership with the YMCA is phenomenal and the department appreciates the use of the facility.

One participant, Courlyn, just graduated. She plans to go to Purdue for pre-law and then to Quantico after that. She says that the Fishers Teen Police Academy will look good on her resume, but the experience was also quite enjoyable.

“The police officers are awesome,” she says. “It’s funny: you can tell they hang out off duty. Like, it’s not just a strict work relationship.”

“Yesterday after the canine unit left they were throwing a football around.”

Grace really enjoyed observing the police dogs on Monday, July 11. The teens got to watch the expert sniffers uncover narcotics. Grace’s favorite part of the week, however, was making new friends. All in all, with the goal of becoming an FBI agent, Grace loves Fishers Teen Academy. “This is something I’m really interested in,” she says.

Officer Alicia Ahnert has contributed toward the program for over ten years.

“I like being proactive and forming relationships with the kids, getting them to know us and to trust us… We’ve had a lot of great people who have gone through our Teen Academy that have gone on and become police officers themselves.”

Burks agrees that the biggest benefit to the department is relationship building.

“A lot of these kids might not take this path down the road in regards to law enforcement,” he says. “But what we do see is all these kids – a large percentage of them – will then start having a conversation with us during he the school year because now they know us.”

That’s why leadership at the Y is so eager to team up with the FPD: social responsibility and youth development are among the YMCA’s core values. In addition to all of its own youth programs, the center welcomes local partners to help forge a strong community of young people.

For more information on all that the Fishers YMCA has to offer young people, please visit indymca.org and check out the “Programs & Activities” tab. 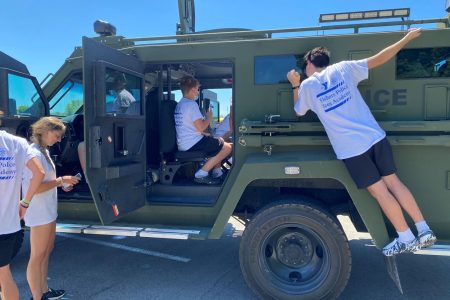