Going Places with the track program

“I think I’m going to switch out my 100 and do a 400,” Doran Bennett announced to his mother and Coach back in May.

Perhaps this wasn’t an unusual declaration for a runner. Doran was taking the initiative to stretch himself. His coach, Jennifer Polk, and mom, Mia Bennett, were surprised. But they didn’t want to discourage him. Sure, Doran had run the 100- and 200-meter races – but not the 400 – since starting Track & Field at the Fishers Y nearly four years ago. Sure, he decided to switch events halfway through the Indiana Youth Track Association season. But it’s not uncommon for an athlete to set a new goal.

What may stand out, however, is that this athlete is just seven years old.

What’s definitely out of the norm? Just two months after challenging himself like that, while attending the regional competition this past weekend, Doran Bennett qualified for the Junior Olympic National Championship.

Doran Bennet has run with the Fishers Flames since he was just four years old. His mother explains that the family moved to Indiana in early 2019 with the military. About two weeks after they arrived, the family discovered that the Fishers Y had a track program. Spring sports had already started.

“I don’t think we were even unpacked yet!” she remembers.

The Bennett family decided to give the track program a try. Mia signed Doran up for the spring season, along with his older brother, Domenic. The boys had never run track before, and Doran had not yet turned five.

“We thought my older son would take to it more,” Mia admits. “They both have,” she says, “but it’s my younger son’s thing.”

Soon after the Bennett boys joined, Coach Jennifer introduced Run Club. All in all, the two young runners have done Track & Field, Run Club, and Cross Country with Coaches Jennifer, Caroline, and Amy at the Fishers Y. Doran has always been a strong runner in all three categories. So, Mia started talking to Jennifer about next-level competition. At that time, the Fishers Flames were only competing among the teams at various YMCA centers in the Greater Indianapolis area. At first, Jennifer responded that the team wasn’t poised to go beyond that yet, but there was a plan to explore greater opportunities.

Then early this year, before the spring season started, Jennifer informed participants that the Y was introducing a program with USA Track & Field. The USATF is a national governing body of four related sports: track and field, cross country running, road running, and racewalking. Fishers Flames athletes had to be quite dedicated to participate in the USATF. The athletes’ parents had to determine if their students were strong enough in their sport to justify the additional fees and practice time.

As for Doran, it seemed that at every IYTA meet he was setting a new personal record. 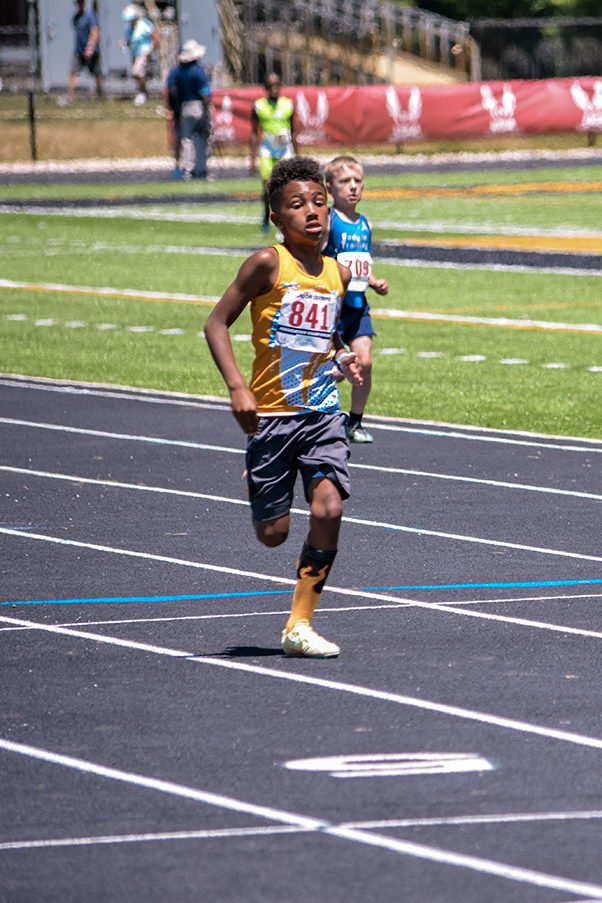 “We went in to this blindly,” Mia explains. “My husband ran track in high school; I was not an athlete at all. So, we’ve been following Doran’s lead in all this.”

After joining USATF, Doran continued to set new personal bests at the state meet. He placed third in the 200, second in the 400, and first in Long Jump in his division. This definitely qualified him to move on in all three events to regionals, which took place this past weekend.

“So, I’m better than all the kids in Chicago?”

He did understand one thing, though: His performance meant he’d move on to compete nationally, in Sacramento, California.

“We were not prepared for this – not at all!” Mia exclaims. It seems it’s been a whirlwind of success for Doran.

Mia notes that there are a lot of life lessons in all of this for a 7-year-old. As proud as the family is of Doran, Mia also wants to encourage responsibility in her son. So, to contribute to travel costs at the level of a child his age, Doran has started watering plants for neighbors going out of town.

The track program competition will take place from the evening of Tuesday, July 26 through Sunday, July 31. Adding up all the trials, semis, and finals, Doran will compete in one or two events per day while he’s there. No one knows from here what the young runner’s future may hold. One thing is for certain: Doran Bennet is going places! 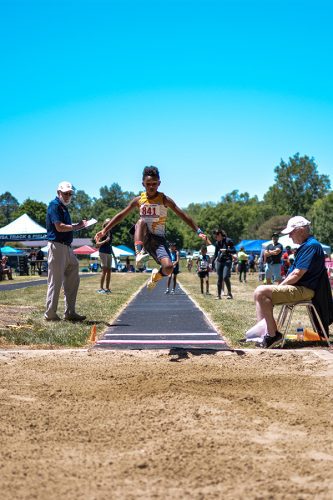 Where could youth sports such as the track program take your child? To learn more, visit indymca.org/fishers and check out the Programs & Activities tab, or email Maryah Antoni, Senior Sports Director, at mantoni@indycma.org.