Fishers BlaYze Cheer Team Rises to the Top of their Division

The BlaYze cheer team, based out of the Fishers YMCA, competed in its first live event Feb.12 and 13 at the Indianapolis Convention Center. Produced by Apex Tour of Champions, the cheer competition was a pivotal debut for the 15 girls, ages nine to thirteen. The athletes placed first in their division with a perfect routine hitting zero deductions.

BlaYze started practices in 2019, according to Coach Tiffany Bemiller. The cheer team classes started out at two practices per week. As time went on, the Sports Program decided to add Squad Tumbling. An optional supplement for the team, Squad Tumbling is specifically designed for instruction in back handsprings, back tucks, and other cheer tumbling skills outside of dedicated cheer team practice time.

“I’m very fortunate to have everyone I have to coach these programs. We wouldn’t have what we have without them,” says Senior Sports Program Director, Marion Fowler.

In addition to the work that Tiffany Bemiller has invested, valuable instruction has also come from assistant coaches Cory Caldwell and Christine Champion. Fowler says that coming to a place where the team can compete has been years in the making.

Until the Apex Tour of Champions, the cheer team had limited exposure to public performance. The only opportunities had been at the youth basketball games every Saturday at the Fishers Y, along with the All City Travel Basketball League games against other YMCA centers throughout Greater Indianapolis. At these functions, however, BlaYze has been the only featured squad. At the two-day competition, there were other teams within the BlaYze’s division, Junior Max Traditional Rec, as well as several other divisions.

Each team performed two sets, one per each day of the Tour. The performances were each worth 50% of the total and at the end of the competition the scores for both sets were added together. Not only did the team win in their division, they came out with an 89.9%, just over six percentage points fewer than the top team score of all participating divisions (96.1%). This means that BlaYze even came out above some All Star teams. “Those are all teams that are practicing two to four times a week for two to four hours at a time.” Bemiller explains. Her recreational squad only practices twice a week for a total of two hours, with the optional tumbling instruction for up to one hour each week.

Elizabeth “Liz” Saracino is one of the teachers for NinjaNastics, another class held at the Y, but for beginner gymnasts (ages five to ten). She placed her daughter Marissa in Blayze three years ago when the program first started. Throughout the course of their involvement, Saracino has witnessed significant change take place in Marissa. Not only has her daughter exhibited teamwork within the tight-knit group, but being part of the squad has even impacted their mother/daughter relationship.

“Cheer has given her something to focus on,” says Saracino. “Having that athletic and social outlet has made our relationship so much sweeter.”

When Marissa first started participating she would prefer to listen to music on the drive to practice. After having built relationships with her teammates, she has become more relational with her mother as well. Now they talk about the team when they ride together, as well as what else is going on in their lives.

Marissa, age twelve, says her favorite thing about cheer is learning the stunts. She explained the difference between a base and a flyer: bases hold the flyers up in the air to do their stunts.

When asked how she felt about the competition she said, “Oh, I was so scared!”

Some of her teammates wanted to chat before their set, but Marissa just wanted to practice. However, when she got out on the floor with her squad, “It was a flush of happiness.” What the team did not expect was that there would be springboard floors at the competition. Marissa smiles: “It was real powerful.”

Girl Power On The Cheer Team

The power goes beyond the springs, however. Director Fowler says of the girls: “They’re understanding what it means to take ownership in a team aspect. They’re learning how to do that at a higher level.” He says that the overarching goal with the classes was to promote girl power.

“I’ve seen a lot of growth in all aspects of her personality,” Marissa’s mother says.

Saracino is also pleased that the cheer team has been able to engage in a competition for the first time. “I think it helped the girls realize they can do it,” she commented. She also said that the competition builds confidence and comradery. “Win or lose, they come together as a team.”

When asked what she would tell someone who is considering auditioning, Marissa Saracino says, “I would tell her to try it!” She smiles, “That’s what I did.”

The Fishers BlaYze Cheer Team will compete again at the Convention Center on March 13, and in April they will travel to Cincinnati for another competition. The team also competes virtually every month.

The Fishers YMCA is accepting auditions for the Sideline Cheer team that performs at YMCA basketball games. Interested parties, with youth aged nine and above, can visit the Fishers YMCA’s website here to view the “Invitation Team” information. For further inquiries, contact Senior Sports Program Director, Marion Fowler at mfowler@indymca.org.

For those interested in trying it out before trying out for the cheer team, there will be a free clinic from 11 a.m. to noon on Saturday, March 18 at the Y. Students will cheer at the All City Basketball Tournament that evening with the Fishers cheerleaders as part of the tournament’s WOW experience. The tournament event can be viewed here. To inquire, email Executive Director of Healthy Living Initiatives, Anne Graves at agraves@indymca.org. 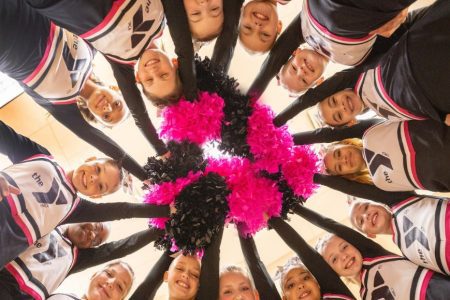