"If you work hard and are willing to let others help you, anything is possible!"

David swam, biked and ran his way across the triathlon finish line

In 2018 a triathlon seemed like a far journey to David. David came to the Hendricks Regional Health YMCA in November of 2018 out of desperation to lose 10-15 pounds before an event at the end of the year. As a former Marine, David volunteers each year for the Marine Corps Toys for Tots program. As the event approached, he realized his Dress Blues no longer fit so he decided to start an exercise routine. Due to previous knee and back injuries, David started off slowly with incorporating low impact exercises such as swimming and yoga. Between his work at the Y and watching what he ate, he was able to lose the pounds needed to fit back into his Dress Blues for the big event, and eventually participate in a triathlon. 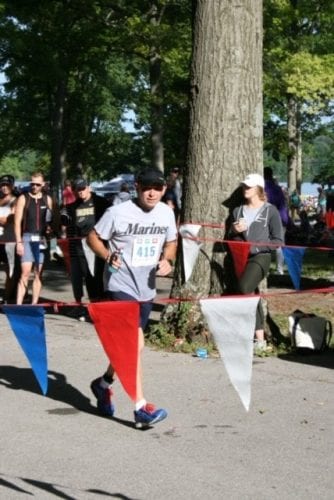 The Toys for Tots event came and went, and David was enjoying the physical activity he previously didn’t think he could do before he joined the Y. He added more strength and endurance training and with encouragement from Y instructors, he completed his first Indoor Triathlon in January 2019. His first triathlon experience was so inspiring and successful that he signed up for the official YMCA Triathlon Training program to compete in the Indianapolis Sprint Triathlon at Eagle Creek in August.

David had never done any sort of group training before and was unsure of what to expect from the training program. With coaching from trainers, Kettie and Andi, and help from others in the group, David crossed the finish line of his first full Triathlon, something he never thought possible. He is already planning to do the race next year with his youngest daughter by his side.

What started as a mission to shed a few pounds turned into a life changing experience for David. He credits the Y for helping him with his knee and back injuries and for becoming stronger both physically and mentally.

“Kettie was standing at the finish line and although I was sweaty, I hugged her. How do you repay a coach that has helped you achieve a seemingly impossible goal? I don’t know what the answer to that question is, but Kettie will have a loyal follower for year to come is one thing that I can guarantee.” – David