Paul’s journey started with chronic back pain, high blood pressure, and many other health issues that restricted him to having to use an electric wheel chair, a small portable electric scooter or a walker.

His weight topped at 315 pounds and reduced mobility became his way of life. Unfortunately, Paul took a turn for the worst and after an incident occurred, he ended up in a coma. For the next 2 ½ months, he remained in an unconscious state, coding three times. Upon awakening, he realized if he was ever to go home, he needed to learn to take care of himself.

A subsequent visit to his family doctor revealed he had diabetes, and the doctor suggested a new diet as well as looking into the Silver Sneakers program at the Y. He and his wife visited on a guest pass and had a good experience, and found that the Silver Sneakers program would cost him nothing and his wife would have a reduced rate, so they joined! The regular exercise, 1 hour and 15 minutes each weekday, began to work magic for Paul. After the continued help of the pool life guards, he began to walk and was able to go back and forth in the pool, working up to a mile. In a few months his weight loss accelerated, and the walker was gladly parked in his storage barn!

Interacting with other members and the constant encouragement of the staff have been important factors to Paul’s becoming healthier than he has been in decades! To date, he has lost 135 pounds, beat diabetes, cut his blood pressure medicine in half, and only uses assistance to walk far distances. 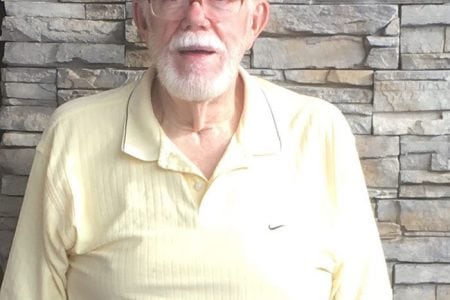 Paul has lost 135 pounds, beat diabetes, cut his blood pressure medicine in half.