When you enter the front doors of the Jordan YMCA, one of the first things that might strike you is a miniature house, five “stories” tall, with a little chimney and a purple roof – on wheels. This fixture in the Nora fitness center is a beloved “Little Library.” The structure greets members with about as much bright enthusiasm as the staff. In addition to those stories which can be found within the pages of its many books, the Little Library has a special one to tell.

Rex Wiley has been a member at the Jordan YMCAM for about a decade. Before that time, he wasn’t very active. “I was in IT computer programming, all that: group software packages, phones, support… I didn’t exercise at all,” Rex shares. He was gaining weight. So, ten years ago Rex decided that it was time to make a change and, since he lives nearby, he joined the YMCA.

“I was losing weight, gaining new friends. I was talking about something other than IT! … Here the topics could be far-reaching. This was my outlet for exercise, socialization.”

From Books to Brunches

About six years into his membership, Rex started organizing monthly brunches for himself and the other retired men he met there. They usually meet on Fridays at various locations near the Jordan Y.

“You can call him two things,” interjects Bill Brown, one of the brunch-goers: “The Librarian, because he takes care of the books; and the Social Chairman. Really, he is; he organized the breakfast crew.”

Rex shares the books to brunches routine: “We start brunches around 10 o’clock. It’s usually seniors; we’re like in our 70s or 80’s, mostly retired. We’ve had as many as 14 and as few as six.” He reflects that the time together, though it’s just a meal, is also a kind of continuation of the conversation that the men start at the YMCA. The only difference? “We don’t have our exercise clothes, we aren’t lifting weights.” The group covers topics ranging from family to career history. “I steer away from politics,” assures Rex.

Bill chimes in: “I come here a lot because there are a lot of geezers I can communicate with.” He sees one of their friends a few feet away in the Jordan Y lobby, and gets up to chat. “And I’m finding another one!”

Rex notes that there are some guys who are loners and not talkers. Though he welcomes everyone to join the group, Rex emphasizes that when they get together they want to talk. “They’re welcome, but they need to reach out to us,” he says. “We do extend a hand. Just like they say [at the Y]: ‘respect, responsibility, caring.’ Just be nice to people, smile, just kind of bring them into the fold, if you can.”

Little Library For All Ages

Even before the brunches were set in motion Rex was finding a way to welcome people. He and his wife would go walking on the Monon trail after he retired. They noticed these little stands with books in them that anyone could borrow. Rex reminisces from his seat near the front of the Y: “I said, ‘Wouldn’t that be nice if that were here? But I don’t want to keep it outside.”

So, four years into his time at the Y he built the little library in his basement. He showed his designs to the leadership at the center, even incorporating some of the YMCA brand colors, blue and purple. He got permission to install the Little indoors in front of the welcome desk. “You don’t have to be a member to use it,” Rex says. He shares that as of six years ago there were about 33,000 registered little libraries in all “six inhabited continents.” Each is assigned a number, and the one at the Jordan YMCA has a little plaque that denotes its official status among those that one can find on the play store when searching “little free library.”

Rex and his wife began stocking the Little Library from books that they found at garage sales. As a train of toddlers ambles by, Rex gestures toward them: “The ones that we have the hardest time keeping are for the preschoolers like this.” He also shares that what tends to fly off the five “stories” of the Little Library is the adventure genre, kind of like the crime shows on TV. “I try to keep it interesting,” he says: “I’ll rearranged the books to make it look different. So, it’s just something to draw them to the Little Library there. It’s for all ages.”

The Little Library is kind of just like the YMCA itself: for all ages. Bill Brown shares that he began at the Y about 4 years ago after having had back surgery. “I have two plates in my back and three vertebrae are involved.” A large part of why Bill joined the Y was the need for an indoor pool where he could walk in the water.

“Not on the water,” he clarifies. “Only one guy ever did that.”

After his doctor’s water walking recommendation, Bill began looking for a fitness center. “The Y was the most economical health club,” he remembers, even before he realized that Silver Sneakers included a free membership.

Walking in the Jordan YMCA pool straightened up almost all of Bill’s back problems. “I went back in, another month or two later and said, ‘I’m whole again, but I’ve got a little bit of an imbalance.” His left side didn’t seem to match his right in strength. Bill’s doctor asked if he did any sideways walking. Incorporating that cleared up the imbalance.

But back pain relief is not all Bill gets out of the Y. “The minute I got there the equipment had the right appeal. I’m made like a Coca Cola bottle,” he quips: “I’ve been working on trying to build up my shoulders. But just gently. I do six different machines. Some for back strength and some for that surgery and some for shrinking my gut.”

The YMCA means more than just physical exercise and the Little Library to Bill: “I think the Y is much more community-oriented than other health clubs,” he says. “The best health club to belong to is your local Y because it does so much more for your community.”

Bill also appreciates the diversity at the Y, enjoying the fact that he can strike up conversations with fellow members regardless of gender or racial background. “You may have noticed that I’m Joe Blabbermouth; I talk to everybody,” he says.

Carol Miller, a member service representative at the Jordan YMCA agrees. She borrows the puzzles that are part of the Little Library’s collection. She likes that the library “keeps you away from technology and helps you socialize.” Member services supervisor, Tanya Lott adds: “I’ve had conversations with people who have lost their spouse and they’re looking for recipes that feed one person, so they’ll go over there and browse through the magazines.”

And the sky is the limit in this environment. There is more than just exercise, the Little Library, and brunches in the YMCA’s future. “So, what’s next?” Rex exclaims. “What else are we gonna do?”

The Jordan YMCA turns no one away! Don’t have Silver Sneakers? Qualified individuals (of all ages!) can get memberships and special program costs at a subsidized rate. To help make these opportunities available to everyone, visit https://indymca.org/ways-to-give/. 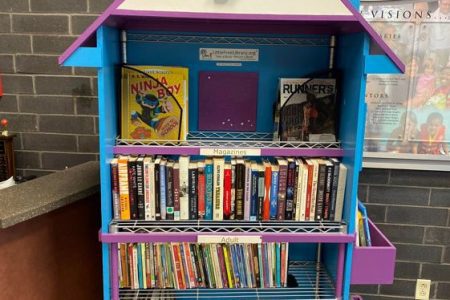