Thomas Felton grew up going to the local YMCA in Brooklyn, NY. Throughout the years, he played on Y baseball teams and participated in pick-up basketball games. Thomas flourished into a talented baseball player and earned a full baseball scholarship to Colorado State University. His potential didn’t stop there; he became an All-American his sophomore year. He also walked on as a member of the basketball team. His junior year he became an All-American in basketball!

Throughout Thomas’ active life, he never imagined not being able to play sports. However, in 2011, Thomas had suffered a stroke that was due to untreated hypertension and high blood pressure. A year before the stroke, Thomas was diagnosed with hypertension and believed that he could cure himself by staying fit, something he had been doing his whole life. Unfortunately, the stroke had left Thomas completely paralyzed on his right side. After months of rehab, Thomas felt lost and empty as he knew he would never get back being who he was.

About a year ago, Thomas decided to join the Ransburg YMCA. He was encouraged by the Member Services staff to meet Brad Bishop, a full time wellness advisor. Thomas met with Brad and told him about his stroke and how the stroke affected his body and mind. From there, Brad started to create exercises that isolated the particular muscles that had been weakened by the stroke.

At the time, Thomas’ core and right shoulder needed the most attention. After some time working with Brad, Thomas is now more confident than he has ever been since the stroke and is able to shoot a basketball on his own! Thomas and Brad have become good friends and Thomas is so grateful for what Brad has done for him. He now has hope that he will continue to improve physically to get back to feeling himself again. 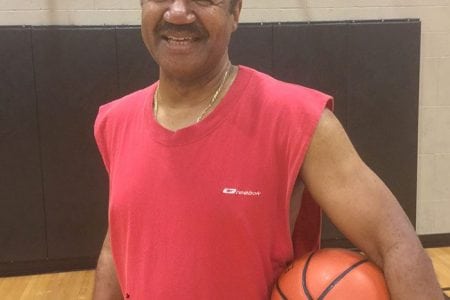 Thomas Felton at the Ransburg YMCA.