Westfield Police Officers Get Trained on Handling Situations around Water

Saving a Life with a Gallon Jug

It’s not every day you get to go swimming on the job as a police officer or help develop life saving skills. But, perhaps that’s why it was so important that the eight officers of the Westfield Police Department made a visit to the YMCA Aquatic Center on Tuesday, October 4. In light of recent events that involve on-the-scene drownings, the Westfield Police Department was eager to team up with aquatics staff at the YMCA in Westfield.

“I just think it’s important that our officers have experience and are comfortable in all situations,” says Special Services Officer Brok Larrson. “There are a lot of ponds and pools around Westfield. Officers need to respond no matter what.”

At the start of the session, Alex Van Winkle, the Westfield Aquatic Center Director, made introductions. Training them on these important life saving skills alongside Alex was the Witham Family YMCA Aquatics Director, Olivia Richardson, as well as the YMCA Association Director of Aquatics, Jennifer Stoneking.

Before even gathering on the pool deck, Stoneking used a gallon of water for an illustration. She said that everyday items can be used as flotation devices. She pointed out that a container can quickly be tossed toward a distressed swimmer if other means of rescue are unavailable or delayed. Drinking those 128 ounces per day could be good for more than just the person consuming them!

“The very last thing we want to do is have you guys go in without any equipment in an unknown body of water to try to make a rescue,” Stoneking stated. “The outcomes are usually not really great in that situation.” Officer Larrson stated that the department is working to obtain official throw bags for the force.

After the group made its way to the water’s edge, Alex jumped into the water. He explained to the officers that they would learn and practice reaching assists, both standing and lying down. He then demonstrated the life saving skills with Olivia. 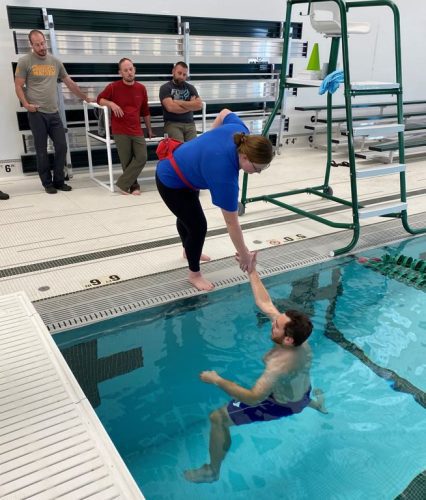 For a standing reaching assist, it’s important to position one foot in front of the other to maintain one’s bearing. A frantic swimmer can easily pull a person into the water with them if that person isn’t well-grounded. Jennifer Stoneking shared that a distressed swimmer is one who can bob up and down, getting the nose and mouth out of the water. When the person can no longer do this, that person is officially drowning.

For a lying-down assist, the goal is to spread oneself out as much as possible on the floor or ground by the water to gain a solid position. In addition to these methods, Alex and Oliva demonstrated extended reaching assists. This is when a person uses something other than his or her arm to reach out. 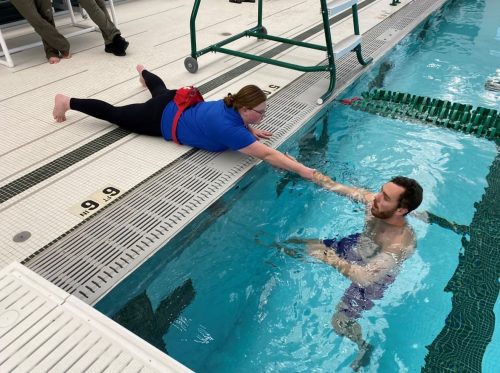 Finally, the officers were shown a throwing assist. Stoneking discussed additional everyday items that could be used as emergency floatation devices.

But the training of life saving skills didn’t stop with demonstrations. The officers were able to put into practice what they were shown. In addition to trying out the assists with each other, the officers practiced basic swim strokes and basic water safety techniques. The officers also paired up to role-play defensive maneuvers. They were given techniques to employ if a distressed swimmer or drowning person wraps themselves around their rescuer. They took turns going through the motions of how to get themselves away and then re-approach. They also practiced diving for a 10-pound brick at the bottom of the pool. 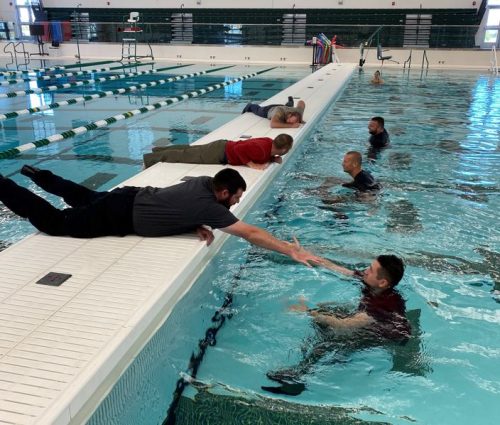 Alex was pleased with the way the day turned out and the life saving skills they were able to teach. He said, “I was glad we were able to partner with the Westfield Police department. Part of our mission is striving to create zero drownings in our community. Furthering our officers’ training can help achieve that goal.”

Want to ensure you and your family are safe around water and have important life saving skills? Check out swim lessons here! Want to see even more 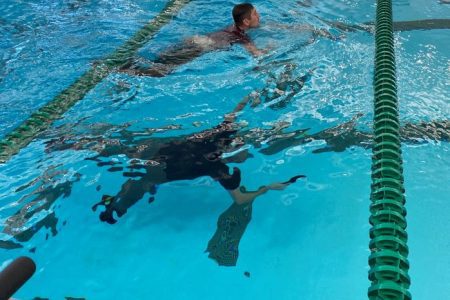