Why Group Running and Walking is Better

Even in the cold winter months!

Running or walking for fitness is often thought of as a solo sport, but you’re missing out if you always hit the road or treadmill by yourself. Ask someone to join you for a run or walk, or better yet consider joining a YMCA running or walking club. There are even opportunities for youth to join a team, practice and compete. Here are several benefits of group or team running or walking:

It’s obviously much safer to run in a group. It’s tough to get lost if you’re with a group and, even if you do take a wrong turn, you have each other to figure out how to find your way. When with a group, you’re less likely to need to listen to music, which means you won’t be distracted or not able to hear cars or other hazards. And if someone in the group gets injured or sick, there’s always someone there to help.

Some people prefer to run or walk alone so they can sort out their thoughts and do some brainstorming. But being in a group may actually get your creative juices flowing even more than running or walking solo because you’re able to bounce ideas off other people and ask them for feedback on a project or problem you’re working out.

With group running and walking, you get your own personal cheering squad. Members of YMCA running clubs and teams root each other on during races and support one another through long runs. You’ll also be more motivated to stick to your training because you and your partners will hold each other accountable. It’s harder to blow off a workout when you know that your teammates are expecting you to show up.

Let’s face it: Everyone thrives on a little healthy competition. When you’re with others who are encouraging you to run faster and harder, it’s easier to take it to the next level. When training alone you may be tempted to cut your workout short, but trying to keep up with teammates encourages you to do that extra hill repeat.

While some deals are sealed on the golf course, plenty of important business conversations have also taken place between runners on the road. Running and walking within a club is a great way to network and build your professional relationships in an unassuming way. Meeting new people through a Y running or walking club is also a great way to expand your professional circles and potentially find a new job, make new contacts, or learn about other business opportunities.

We all like some alone time when running, but group runs fly by much faster. It’s tough to get bored when you’re running with others. You’re also more likely to explore new routes when running with a group, which will definitely make your runs more interesting.

Running or walking with a group gives you an incredible sense of community. Whether you’re racing together, volunteering at a race, or cheering on your teammates, it’s fun and rewarding to be connected with like-minded people and be part of something that’s bigger than you. Runners can really relate to each other and are supportive of one another through running (non-running) problems and triumphs.

Anyone who has run with a group knows that it’s a great opportunity to get to know people with similar interests. Many people have met their spouse, significant other, or close friends through a running group or club.

It’s not too late to join the Mini Marathon Training programs. Just stop by the front desk, and they’ll get you signed up!

The Y offers opportunities to showcase your hard work through the annual YMCA Inspire Indy 5K Series. The series’ eight races at 10 different locations make it easy to keep setting and achieving your walking or running goals. The 2019 YMCA Inspire Indy 5K Series begins with a Virtual 5K on April 15, and participation helps the Y offer programs so everyone in Greater Indianapolis can achieve and maintain a healthy lifestyle.

YMCA RUNS ALL YEAR ROUND

Need more motivation? Read what running at the YMCA did for Andrew, Tara, Jon, Erin and the Ellis family!

Several Central Indiana Ys offer a youth track and field program. Teams train and practice starting in February and concludes with an All-City YMCA Track Meet in May. Kids under age 7 can do the new Cub run at the Polar Bear Run on Feb. 16. $10 of the registration fee goes to the Irsay Family YMCA’s annual campaign. 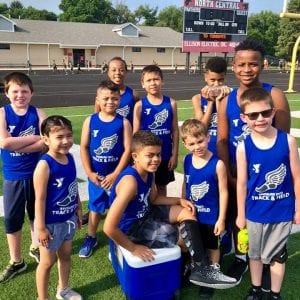 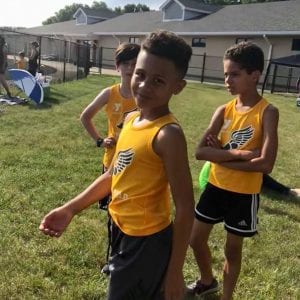