Be Inspired to become a YMCA Lifeguard

Leaders in the community share their stories of how being a lifeguard positively influenced their futures.

Becoming a lifeguard is more than a just a job and earning money, it provides you with skills such as responsibility, problem solving, leadership, and teamwork that are transferable for any career path you may take.

Take a look at these former lifeguards as they share their experiences that shaped their lives into careers inside and outside of the Y!

“At 15, I never imagined my first job would turn into a lifelong career.”

Chelsea Walls became a certified lifeguard at Avon High School in 2005.  The job checked all the boxes of Chelsea’s passions; swimming, helping others, and leading people.  She worked in various aquatic capacities including a water park, teaching swim lessons, and at a summer camp- all deepening her love of all things pool! When a YMCA was built in her hometown in 2011, Chelsea applied and had no idea how it would shape her future.  She started at the Hendricks Regional Health YMCA as a swim instructor and lifeguard.  After a few short months, she was promoted to Aquatic Program Coordinator where she started her leadership path in the YMCA organization.

At 24, Chelsea became the Aquatics Director at the Witham Family YMCA where she operated and programmed a pool and led staff for five years.  Since 2019, Chelsea has served as the YMCA of Greater Indianapolis Association Director of Aquatics leading nine Aquatics Directors to promote aquatic safety, the lifelong skill of swimming, and employment of future community leaders.  “At 15, I never imagined my first job would turn into a lifelong career,” Chelsea said.

“The YMCA has so many career opportunities available and lifeguarding is a great way to learn some good skills and get your foot in the door.”

I became a lifeguard at the Baxter YMCA when I was 16 years old.  My family had always been Y members, and I participated in swim lessons and soccer when I was a kid.  My older brother was a lifeguard and when it came time to get a job I followed in his footsteps.  I was a lifeguard throughout high school and sometimes after my lifeguard shift, I would stay at the Y to work out in the weight room.  It was then that I learned I enjoyed exercising and decided I wanted to major in Kinesiology at Indiana University.  When I returned home from college in the summer and during breaks, the Y always welcomed me back and gave me hours to work.  I even met what would become my wife at the Y during my last summer lifeguarding before I graduated.

I looked for a career at the YMCA after graduation and jumped at the opportunity to apply for the wellness director position as soon as it opened up.  For ten years, I was a wellness director before I took a senior wellness director position at another Y.  A few years after that, I accepted my current position as Associate Executive Director.  Some of the skills I learned as a lifeguard paved the way for my growth within the YMCA.  The YMCA has so many career opportunities available and lifeguarding is a great way to learn some good skills and get your foot in the door.  It’s hard to believe that I have gone from lifeguard to executive, but within the YMCA it is possible!

“Being a lifeguard is not a seasonal job; it’s a lifelong commitment.”

Megan Eklof started as a lifeguard at Indy Island, a facility part of the City of Indianapolis’ Parks and Recreation Department. She worked there for 3 years as a lifeguard and 2 years as a supervisor before heading off to college at Ball State University. While at Ball State, Megan pursued a bachelor’s degree in aquatics. As part of her degree, she was required to complete an internship in a different aquatic environment than she already had experience in, and it was this requirement that led to her career with the YMCA. Megan interned two summers at YMCA Camp Thunderbird in South Carolina, the first year as the Assistant Waterfront Director and the second as the Assistant Waterfront Program Director.

After that second summer in South Carolina, Megan became an Aquatics Director at the Lima Family YMCA in Lima, Ohio. Having served the people of Lima for nearly a year, Megan saw an opportunity to open a brand new YMCA from the ground up back home and knew she had to rise to the challenge. Megan became the Aquatics Director at the OrthoIndy Foundation YMCA in October 2018 and has been here ever since. “Being a lifeguard isn’t a seasonal job, it’s a lifelong commitment,” says Megan.

“I never thought I would find my passion in life leading me to my career at 16.”

Deidra Rosemeyer became a certified lifeguard at Franklin Central High School in 2006. Being a lifeguard had e

verything Deidra was looking for in a job; providing a safe environment, community interaction, and her love for the water. She has served three different YMCA’s and two aquatics centers as a lifeguard, teaching swim lessons, and as a water fitness instructor. In spring 2017, Deidra applied at the Baxter YMCA for the Aquatics Program Coordinator and had no idea it would forever change her life. Winter of 2017, Deidra was promoted to Aquatics Director where she began daily pool operations, aquatics programming for members, and teaching and growing staff for their future. “At 16, I never thought I would find my passion in life leading me to my career.”

Jordan (Wasson) Stephan began working at Hendricks Regional Health YMCA as a lifeguard in 2012.  This was a part time job while she was in high school. She has worked in various Aquatics positions, centers, and departments. Jordan has worked as a Lifeguard, Swim Instructor, Head Lifeguard, On Deck Supervisor, Aquatics Coordinator, and Safe Sitter Instructor. Jordan continued working as a lifeguard through college. She now has graduated and is working at Methodist Hospital as a Riley NICU nurse. She continues to teach Safe Sitter at two YMCA of Greater Indianapolis centers. “The Y helped me learn important communication skills and how to calmly handle tough situations, this has helped tremendously in my career as a NICU nurse!,” Jordan said.

“I am thankful for working in aquatics because it has taught me what it means to be a leader, a participant, and it has given me challenges that help me advance in my personal goals.”

I started off at the Y working as a lifeguard. My only intention was to work there for a summer and get a “real job” after the summer. I knew that they Y would be a good place to work for a summer because my sisters had worked at the Y before in the same position. They had positive experiences there. I didn’t know it yet, but after that summer, I was hooked at the Y. I became a Head Guard a few years later. With that came newer responsibilities being in a supervisory role. It was hard, and I didn’t do well at first, but I found that it was a position that fit.

Nearing the end of my head guard role, there was an event that none of us ever thought would happen. Someone had a heart attack at our pools, and I got to participate in saving their life. It was a thrilling experience and I knew that I was with an incredible team. Today I am the Associate Aquatics Director in charge of the aquatics team and giving them the training and experiences they need to grow. I am thankful for the Y and the experiences they have given me.

“The Y allows me to use my passion for water, helping families, and developing others.”

I’ve been around pools and water my whole life. Starting on the swim team in the eight and under age group to having my first job as a lifeguard at a country club when I was in high school. My kids were talking swim lessons at the Y when I was approached by the director at the time asking if I was interested in teaching swim lessons part time. My swim instructor job was originally planned to be just a part time summer job, however it very quickly led to coordinating summer swim lessons and then accepting a full time position as the aquatics coordinator. Within a couple months after becoming a full-time coordinator I was able to step into the director role.

As the country’s leading nonprofit organization committed to strengthening communities through youth development, healthy living and social responsibilities, the YMCA offers more than just a job – it offers a career with a future and the chance to make a lasting difference in the community. Whether you’re looking for full time, part time or split shifts, the YMCA provides the flexibility to ensure a positive work-life balance. Lifeguarding is accessible to all ages and backgrounds.

If you’re interested in being a part of the YMCA of Greater Indianapolis Lifeguard team, please fill out our inquiry form to start today. 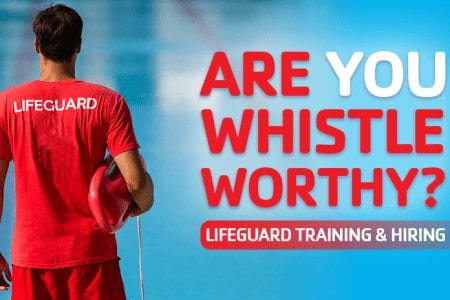 Be inspired to become a lifeguard.