Myzone App Gives Realtime Fitness Feedback to Up Your Game

Members at the YMCA of Greater Indianapolis will soon have a new tool to assist them in their quest to achieve their health and fitness goals. Myzone Exercise Tracking System will be available to use in Small Group Training at the Baxter Y on June 1. YMCA at City Market has had Myzone since January 2018 and has proven to be very popular. 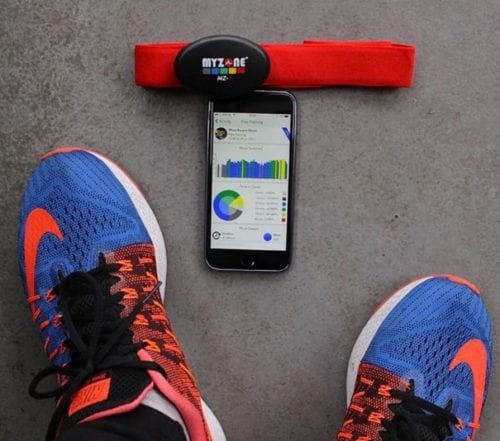 Put simply, Myzone is a wearable band that monitors your heart rate, calories burned and time exercising. As long as Bluetooth is on and the Myzone app is open to ‘Workout’ mode, your phone will record your Myzone stats until your workout is done.

The MZ1 will come free with Small Group Training registration which is $35/month for express workouts at the Baxter Y, unless the new member decides to upgrade to the MZ3, which costs $75, explained Cameron Williams, associate wellness director at the Baxter Y.

Available for free with SGT

“At this time, we are not offering the belts to anyone outside of SGT,” said Williams. “So, members can decide to receive the MZ1 belt for free when they sign up for SGT or pay extra to upgrade to the MZ3. The MZ3 can also be purchased on Myzone’s website for $150.”

The Baxter Y is already giving out a complimentary belt to current SGT teams to test the system through May.

“We will officially offer Myzone as a feature of Small Group Training starting in June,” said Williams.

Maggie McCoy, wellness director at YMCA at City Market, says people love the belt, and they have been wildly popular since they got them in January 2018. 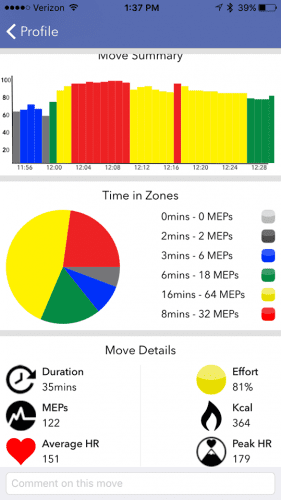 “Members love the workout summaries they receive at that the end of class,” said McCoy. “It holds them accountable and gives them a visual of their progress.”

“Overall, people like to see hard data to support their efforts. Before implementing Myzone, we had no hard data to point to regarding the progress of their workout,” said Williams. “Now, people can watch themselves get better every day.”

Monitors to track yourself and the competition

Member stats are also displayed on the gym TV. It transmits things such as heart rate, calories and MyZone Effort Points (MEPs).

“Members get to track their workouts on the free Myzone app once they purchase a belt,” said McCoy. “The MyZone app sends the user a ‘workout summary’ and shows them how many more MEPs they need to achieve to reach their monthly goal that they set when they first download the app.”

“People seem to love the competition, whether with themselves or someone (or everyone) else in class,” said Williams. “Everyone wants to prove how hard they are working and to be rewarded for that effort. Their app helps a lot, too, by allowing our members to connect with one another by “liking” or commenting on another athlete’s performance.”

The Baxter Y will also be using Myzone’s “challenges” feature to reward members for their efforts.

“We will be hosting challenges periodically, most often based on MEPs earned in a given timeframe, with rewards such as YMCA and SGT swag, free months of SGT and credits for other YMCA programs,” said Williams.

“Members are also loving the Monthly Challenges we do, where they get to have friendly competition between other members and staff who also have the belts,” said McCoy. “It’s a great motivation tool to give a little extra in training.”

What’s so great about it?

Myzone can be used anywhere as long as you have your phone to record the data.

“That’s the beauty of it, you can use it anywhere!” said McCoy. “Since everyone will have the app when they receive a belt, you can turn on the MyZone app and work out at the gym, outside, at home or anywhere else.”

Benefits of the program

There are tons of benefits for centers, and most importantly, members. Myzone monitors allow for accurate, real-time feedback, which has shown to provide an increase in effort and intensity.

“The technology is individualized, so each person’s statistics are based upon their own effort, as opposed to some arbitrary baseline, which puts every athlete on a level playing field,” said Williams. “This way, everyone feels connected to one another within the context of each workout and no one feels left behind.”