Sam is an inspiration to YMCA Members and continues to motivate by example.

In April 2018, the YMCA published a story about a member that inspires members of her community. Samantha Schultz’s story about her journey from a traumatic brain injury to a beloved staff member of the Benjamin Harrison YMCA that inspires and motivates YMCA members. She had overcome so much, but her story continues to be written.

Sam Tells Her Story and Inspires the Community

That story sparked fame that caught Sam by surprise. Her story had touched so many. It was picked up by the IndyStar where she was featured in their June 2018 issue. Sam told her story again, this time on film, for the 2018 Easterseals Crossroads Annual Meeting inspirational video. She even spoke on the big stage at the North American YMCA Development Organization Conference in the summer of 2019. Sam’s last speaking engagement was at the Benjamin Harrison YMCA Summer Bash in 2021. The requests keep coming.

Throughout this whirlwind of public speaking, Sam remained her humble self. Her story was out. The YMCA members she served now knew a lot more about Sam’s past. They understood a little bit more. But she was still Sam. She was a friendly face that members would see in the afternoon. An employee that was always early and kept busy throughout her shift. She has remained a daily inspiration to those around her.

“Oh, I light up when I see her! She’s strong, determined, friendly, and sweet. The whole package!” remarked Canda, a longtime member of the Benjamin Harrison YMCA. “She is my inspiration. I know what she’s been through and she keeps working on herself. On those days when I feel lazy, I think of her and get on in here.”

Sam hasn’t stopped working on herself. In 2018, her story left off with a goal to complete the YMCA Freedom 5K in July and put her hair in a ponytail by herself. Well, she’s done both! She has even gone on to finish the 2019 Drumstick Dash and tie her own shoes. Sam has earned her Driver’s License and with the help of Superior Mobility and the Rehabilitation Hospitality of Indiana, has an adapted car that helps her get where she needs to go.

Sam continues her physical therapy at NeuroHope in Lawrence. The group workout setting naturally motivates patients to push themselves. Sam has noticed a difference in her ability to move her left hand and walk more smoothly. She speaks about how constantly supportive and caring the staff is.

“I can even play video games!” Sam exclaimed. “My boyfriend, Jon, built an adapted game controller so we can play games like Mario Kart and Animal Crossing together.”

Jon, along with Sam’s parents and new fur-baby Mo, has continued to help Sam become the woman she is today.

“After my accident, no one expected much from me. I could have sat on the couch, but I didn’t. I kept moving I kept going forward, Sam recalled. “My support system helped me do it. I am so thankful for the way my parents raised me.”

Each morning that Sam starts her day as a Wellness Advisor at the Y, she and a group of members meet up for a three-minute plank at 6 a.m. YMCA members, Julius and Rodney, started this morning tradition and encouraged Sam to get involved. Now it is part of her routine!

Sam has grown her area of expertise to the Membership Department where she opens five days a week. She continues to be a light to members. Sam is truly a staple of the Benjamin Harrison YMCA.

Over the past 25 years, there have been many stories of impact, big or small, from the members of the Benjamin Harrison YMCA. We would love to hear your story so we can continue to inspire and motivate members of our community. Please take the time to share with us! 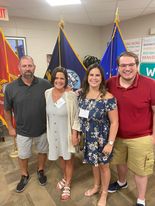 Sam shared her story at