Newcomers find their way to the YMCA

As we roll out the red carpet for National Welcoming Week, Sept. 14 – 23, 2018, and host Community Day on Sept. 19, we’ve gathered a few stories from staff who love working at the Irsay Family YMCA, and who are also immigrants or temporarily here in the U.S.

I hope you enjoy and share their stories! Please join us for all the #WelcomingWeek festivities. 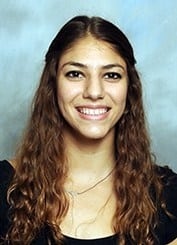 Four years ago Christina Voskou traveled to the U.S. from the tiny island of Cypress just off the coast of Greece. She came to the States to study at the University of Indianapolis on a swimming scholarship. As a student on a temporary VISA for school, Christina was ineligible for paid employment. So in June, she began an unpaid internship as a lifeguard and swim instructor at the Irsay Family YMCA at CityWay.

Now, with 300 hours under her belt, she’s gained new skills in water safety and pool management that she will apply when she returns to Cypress to earn her Master’s degree in Kinesiology.

“The Y is like a big family,” Christina says. She loved working with the children, which she’d done in Cypress, and could always ask for help without feeling embarrassed.

Christina says she’ll miss the YMCA and the friends she’s made and already has plans to visit the U.S. again soon.

Nathalia Garcia was 2 years old when her mother brought her and her two sisters from their home country of Honduras to the United States to join their father. That was in 2001. Nathalia is now a Southport High School graduate and in the first generation in her family to attend college.

DACA since she was 16

Nathalia has been part of the Deferred Action for Childhood Arrivals, DACA, since she was 16. Her older sister is also in the program. After hearing about the YMCA at a career fair at school, she began working at the Irsay Family YMCA in Indianapolis as a lifeguard last year.

Nathalia enjoys the people she’s met at the Y. She likes her supervisor and coworkers and appreciates the flexibility the Y offers while she’s studying to be a dentist at Indiana University Purdue University Indianapolis.

About 20 years ago, Monica Hernandez’s mother brought her and her brother to the United States from their home country of Mexico. Monica was 12 years old at the time and admits that although she understand why her mother made the decision, it was a difficult transition at that pivotal age.

Language barriers made middle school difficult. She and her family lived in crowded quarters with extended family when she began high school in Indianapolis. They eventually moved to their own apartment, and she transferred to another school.

Membership for All helps out 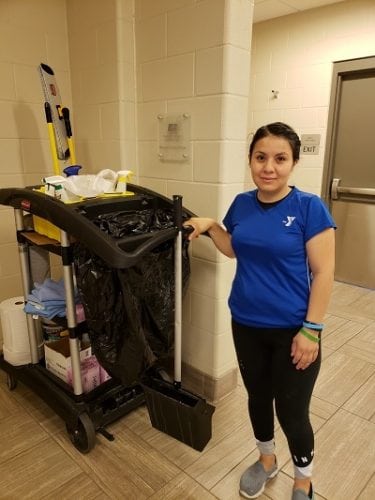 Now married with three children of her own, Monica and her husband have been in DACA for four years and work hard to support their family. She and her children became members at the Irsay Family YMCA at CityWay in 2017 through the Y’s Membership for All program. Supported by donations, the program makes it possible for families of all income levels to join the Y.

Monica joined the Y because she wanted a place to work out and where her kids could learn how to swim. All of this has happened! She works out while the youngest is in Play and Learn, and the older kids now know how to swim.

A few months after joining the Y, Monica learned that part-time employment at the Y included several hours of complimentary child care. She was hired last year as a custodian and plans to work full-time when her children are older.

Monica Hernandez has fallen in love with the Y and is sincerely appreciated by her coworkers. In July, Monica was the Irsay Family Y’s first recipient of the Core Value Award, which recognizes employees who best exemplify the Y’s four core values of caring, honesty, respect and responsibility.

Do you know someone who would love working at the YMCA? Send them our way!