Triathlon as a way of life

Triathlon is a family commitment for Shellenberger's

Being a triathlete means something different for everyone. For Todd Shellenberger, triathlons have been a big part of his life since 1991; but let’s go back a little bit. Todd moved to Indianapolis from Pennsylvania in 1989. He began competing in triathlons when he was 24 years old after childhood friend, Doug Robinson, a former triathlon coach at Jordan Multi-Fit, convinced him to try the sport. Todd had always been an athlete and found himself looking for a challenge and a means of maintain his conditioning; the combination of swimming, biking, and running seemed like a good fit.

Todd refers to himself as a “Recovering CPA”. He assumed he would be working with numbers the majority of his life. But things tend to change, as they did for Todd. He found himself looking for something that truly lit his inner fire. Jamie, Todd’s very supportive wife, recognized that Todd was searching for something else professionally and encouraged him to go seek it out. Todd was able to turn his love of triathlons into a way of life for himself and his family.

Todd began working at the Baxter YMCA 10 years ago. He started the Kid’s Tri Tornadoes in 2009 and later that same year, added the Adult Tri Tornadoes. Todd has also served in the role of LIVESTRONG at the YMCA Trainer and as a Personal Trainer at Baxter. Being at Baxter has allowed Todd to hone his triathlon skills and share his love of the sport with others.

Todd’s 17-year old son Drew Shellenberger, a very accomplished triathlete in his own right, also competed in Switzerland in the ITU Junior World Championships in a draft-legal race in which he finished 27th. As an added benefit to being part of some great racing, Todd and Jamie celebrated their 30th anniversary during the trip!

If you ask Todd why he competes, he explains, “Competition and fulfillment of dreams. To prove you can do it. Set goals, reach them. You and the clock, it’s just an overall sense of achievement.”

Has he ever thought of quitting doing triathlons? “No. As much as there are times you might think that after a tough race, I realize I don’t exist without it. I would need another outlet. It’s just who I am. Through triathlons I can influence and help people. It rewards hard work and it’s something you have control of.”

On the topic of the Baxter YMCA, Todd is very grateful. “Everything I do now is due in large part to the Baxter YMCA and the Tri Tornadoes. The structured environment, people with similar goals, cheering together. It’s just so rewarding; watching others achieve.” One of the team’s biggest accomplishments was in 2014 when 8 of the Baxter Tri Tornadoes trained all season to compete in the Ironman in Louisville, KY. “It was just so amazing to have so many of us in the same race. We had trained together, and there we were, reaching our goals together!” Todd finished first in his age group in the Louisville race which earned him a spot in the Ironman World Championships in Kona, Hawaii. Racing in Hawaii was a dream come true and the culmination of almost 2 dozen years of hard work.

Todd has a favorite quote that is worth repeating, “Hard work beats talent when talent doesn’t work hard.”

If you are interested in trying out the Tri-Tornadoes at The Baxter YMCA, contact Bobbi Finley at 317.865.6464. 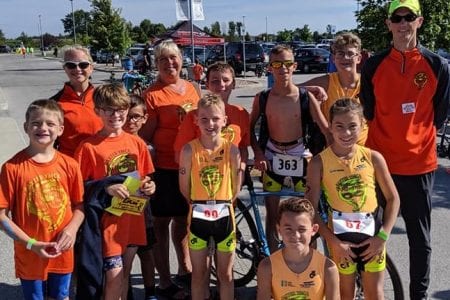