YMCA of Greater Indianapolis, a Snapshot

Circle City and the YMCA have come full circle

The YMCA’s global mission—to build healthy spirit, mind and body for all—has been actively engaged in Central Indiana since 1854, nearly 165 years! The breadth of service and impact is unmatched by many nonprofits. Currently the 19th largest association in the nation, the YMCA of Greater Indianapolis boasts 12 YMCA centers, a beautiful 240-acre overnight camp, and Youth Development and Intercollegiate branches.

Last year, the association provided $7 million in Y scholarships and underwritten programs, and its 3,000 passionate employees served more than 250,000 people of all ages and backgrounds.

Nestled in the heart of the Heartland, Indianapolis is known for fast cars, its thriving, walkable downtown and burgeoning suburban neighborhoods. Indy has gained acclaim for a flourishing culinary scene, lively arts and cultural districts, affordability, Hoosier Hospitality, and so much more. Learn more about the Circle City and surrounding communities at nomeancity.com and visitindy.com. 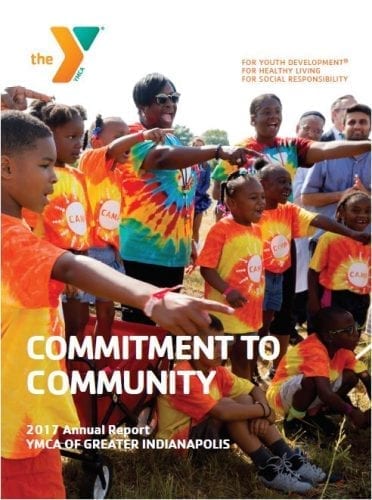 This fast-growing YMCA boasts world-class facilities and demonstrates strength in fiscal responsibility and excellence in safety practices and standards. The culture of “freedom with accountability” has enabled new, innovative programs and greater impact in the seven-county area it serves.

The YMCA of Greater Indianapolis has established itself as a national leader in:

For more information, view this list top initiatives and achievements for the YMCA of Greater Indianapolis in the last 12 years and recent milestones in the 2017 Annual Report.

While Indy is thriving, our communities have room to grow in the areas of health and wellness. Indiana consistently ranks low on national health indexes and has higher than average number of people who smoke or live sedentary lifestyles. With a strong presence and brand in the community, the YMCA of Greater Indianapolis is poised to raise the bar on health and fitness in Central Indiana guided by a 5-Year Strategic Plan and with focused effort in these areas:

Drop in any YMCA in Central Indiana to meet our staff and learn more!