WAVES SWIM PROGRAM HELPS JEREMIAH GET BACK ON HIS FEET

Jeremiah has always had a love for basketball. Since 2012, he’s been a member of the Ransburg YMCA and in a basketball league. He would come into the Y’s doors every day with a big smile on his face, excited about the upcoming practice or game. 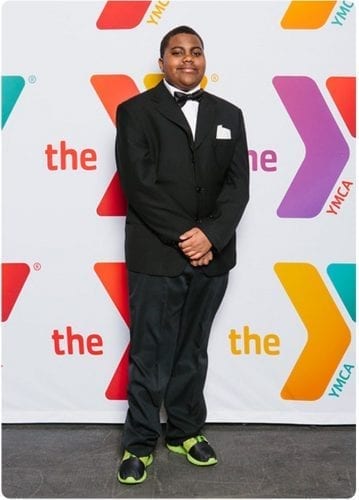 However, a few months after joining the Y, Jeremiah was diagnosed with Lupus. Lupus is a chronic disease that attacks the immune system and organs in the body.

In October of 2013, Jeremiah suffered a critical medical event that put him in a coma. At one point, he was declared dead for five minutes.

The doctors were able to revive him, but the damage had been done. Jeremiah lost the ability to walk, talk and eat. He spent three months at Riley Hospital before he was finally released to go home on Christmas Eve.

For two years, he underwent an intense rehab process, with the YMCA as his support system. In an effort to rebuild his muscle strength and motor skills, he became active in WAVES, the Y’s aquatics program designed for people with special needs. Bit by bit, Jeremiah regained his strength.

In just one year, Jeremiah went from lying in a hospital bed, to walking in leg braces, to shooting three-pointers on the basketball court. He plans on rejoining the Y’s basketball league once he feels ready.

Today, when he walks through the front door of the Y, he is full of smiles and delight again, just as he should be.

To help kids like Jeremiah, you can make an online contribution to the Y’s Annual Campaign.