Y's Own Santa Claus Gives Back Big for Christmas

Four years ago during Christmas, William Demaree, director of fixed operations at Tom Wood Management, wanted to make a difference. He collected 129 toy donations from Tom Wood customers. However, plans fell through when his donations were not accepted.

From the radio, William learned that there was a toy drive at the fairgrounds while he was driving with his wife, right before Christmas. He hurriedly packed the toys up in his car and rushed down to the Indiana State Fairgrounds. “I flew down there,” he said. “I drove as fast as I could.”

There, William found the YMCA Avondale Meadows folks. And he arrived just in the nick of time.

Our president and CEO Eric Ellsworth, greeted William and pointed to a line of kids. Eric said, “I just want you to know that we were getting ready to announce that we were out of toys, and we weren’t going to be able to provide gifts to about 100 kids, and here you show up with 100 or so toys.”

That moment was life-changing for William. “From that point on I decided that if I have anything to do with it, there will never be a line with no toys left for the children,” he said. 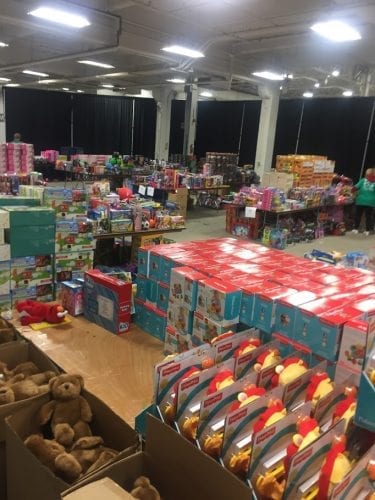 In the four years since that first Christmas, William’s toy drive at Tom Wood has only grown. He has expanded his operation to include bikes — little ones and big ones — so that older kids who may not have ever had a bike aren’t excluded from getting presents.

“We have our own Santa Claus,” said Meresa Creekmore-Armor, associate vice president of community development and executive director of Avondale Meadows YMCA. “William is so committed to the Y and the families in our community. He is determined that every child is going to have a Christmas.”

Last year, William gathered more than $60,000 worth of toys.

Three gifts for every child

“Everybody really stepped up and has embraced this movement to make sure that the children in our city gets three toys — not two — on Christmas,” said William. “That inspires me — it’s all about the kids.”

You can help too

To fulfill this need, we are collecting toys at 12 area YMCAs until Dec. 13. Donate a toy or two and join William and the YMCA in bringing Christmas to over 3,000 children this year. To make a contribution that will help ensure every child gets a present on Christmas, visit indymca.org/annual-campaign-support.