Fighting for Focus and Good Form

In Part 1 of this story, Megan Ryle shared with the Fishers YMCA just how much Taekwondo has benefitted her three sons. Her two older sons, Ian and Alek, take pride in being an example to the other students. But they aren’t the only ones. Nisreem Hamarshah’s son, Yousif Obaieda, mentioned to his mother that he wanted to get his black belt. His reason? He wants to be an instructor like Mr. Seay. Sometimes Yousif asks Nisreem to be dropped off early to help his teacher with the beginners’ class.

Nisreem says that she and her husband had put Yousif in basketball, but it wasn’t his thing. So, they tried Taekwondo. On Yousif’s first day Mr. Seay showed the students so many forms that she didn’t think he would remember them. But he retained them all in just the first session! Nisreem shared that this is a good sport for Yousif, because he thrives on individual responsibility to succeed.

“This is the best thing that has happened in his life,” she says.

She shares that the classes have helped him both physically and mentally. He has gained agility and flexibility and his focus has improved as well. Yousif has become more and more self-disciplined.

The sport has also helped him manage his emotions. In the past when he was upset, Yousif got emotional. Now he has learned to contain that emotion, to focus it. If he’s frustrated or upset at home he practices his moves on the pad his parents bought him for his birthday. Nisreem feels he has grown a lot for a 9-year-old. And with this outlet, he is now better able to articulate what he’s feeling.

Megan shares that Taekwondo has also helped her oldest son with focus.

Leveling Up and Making Friends

“Green belts, did we finish the form, yes or no?”

Mr. Seay calls out from the front of the class. The lower-level belts try to recall and respond to their teacher. He continues speaking to the class:

“On Tuesday, ya’ll who are green belts: what part of the form did we get to?”

The students call out a couple of different numbers, designating the form they last learned.

According to Grand Master Duncan Williams, there are two levels of each belt color. Except for the first belt, which is white and stands alone. The first level of a given belt is a solid color. Then, the second belt in that color includes a stripe of the next color. In this way, the belts indicate what level the student is pursuing next.

The belt hierarchy is as follows: white, yellow, yellow-green, green, green-blue, blue, blue-red, red, red-black, and what’s called a recommended black belt. The recommended black belt indicates a probationary period. After that, there is a certified black belt. The recommended is plain, whereas the certified black belt has the student’s name embroidered on it. Children age sixteen and under who have attained to a black belt are called “poom,” and their belts are half red and half black. Adults, age seventeen and up, are called “dan.” Two students who have come through the program at the Fishers Y have reached Master’s level, which is achieved at the fifth degree of the black belt.

At a blue-red belt, Yousif is well on his way. Especially given the amount of time he’s been in Taekwondo, which will be two years in August.

Though this is Yousif’s 7th belt, his opponent’s level doesn’t matter to him. Sometimes he will spar with a green belt when the other student demonstrates good kicks or strength. Occasionally someone at his own level won’t kick very hard. That’s when he expresses a desire to spar with an opponent whose kick is more forceful than his own. He wants someone to challenge him, and “put him over the edge.”

All of this one-on-one interaction brings up another beneficial aspect of the class: the opportunity for socializing. Nisreem, who has taught at a university level, decided together with her husband to homeschool Yousif and his 4-year-old brother Rafi. Taekwondo, as well as other sports and activities at the Fishers YMCA, provides a social outlet for the boys.

Megan Ryle’s sons, Ian, Alek, and Zeke have enjoyed the social aspect as well. Ian formed a friendship with classmate Nora, who is around his age. Megan has gotten to chat with Nora’s mom, Kim, at the tournament. She chuckles at their children’s friendship:

“After class they like to walk out to the parking lot together, singing ‘We Don’t Talk about Bruno.’” 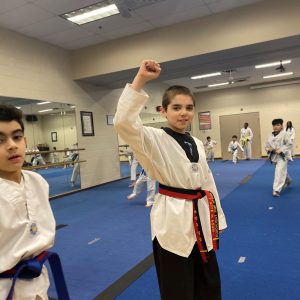 All that the Y offers is so important that Nisreem and her family decided to invest in a family membership. In addition to Taekwondo, Yousif and Rafi have been involved in soccer and basketball. The brothers have also taken advantage of Play & Learn (child care which is discounted for members) while their parents go to the Wellness Center. The four of them go to the pool on the weekends and Nisreem has tried a variety of classes, as well as a 5k run group. She recommends the splash pad!

The YMCA asked what Nisreem would tell anyone considering a donation to the YMCA. She emphasized the importance of exposing children to an environment where they could focus their energy on activities, such as sports. According to this mother, the ability to provide that outlet in a safe place is what makes the YMCA so special. The opportunity for a family to take part – regardless of their current financial situation – is simply good form.

To support families in activities like Taekwondo, visit https://indymca.org/ways-to-give/. 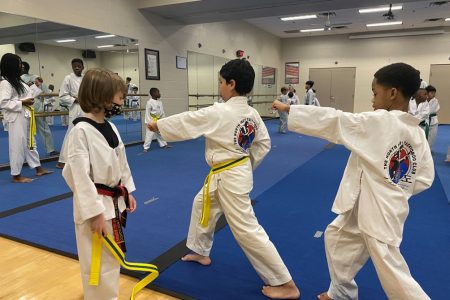