This is the first in a series of stories about the 10th running of the Wishbone 5K.

“If you run, you are a runner. It doesn’t matter how fast or how far. It doesn’t matter if today is your first day or if you’ve been running for twenty years. There is no test to pass, no license to earn, no membership card to get. You just run.” ― John Bingham

Steve Rodino wasn’t a runner. And it wasn’t his idea to begin running.

His A1C level was borderline, so he signed up for the free Diabetes Prevention Program at the Fishers YMCA at the urging of his doctor. In the first class, a trained lifestyle coach reviewed simple steps he could take to improve his numbers by changing his diet and introducing exercise. For those who don’t know Steve, he’s not afraid to face a challenge.

“I had been sedentary for so long and heart disease was common in my family, so I thought I’d give it a try,” Steve recalled, “so I signed up for a Warrior Dash obstacle race with my son Tyler to prove I wasn’t as unfit as I thought.” 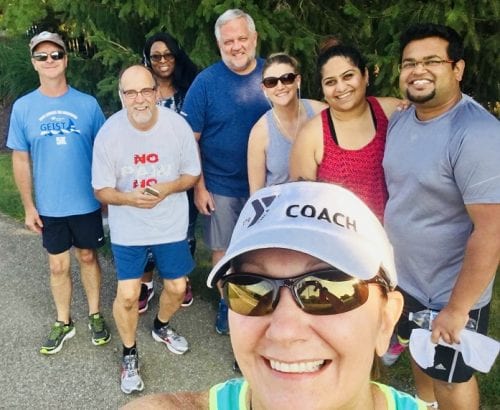 Along with the weekly classes at the Y to begin making healthier choices, Steve began strength training.

“My wife said to me ‘it’s great that you are working out, but you know you should really learn how to run too!’ So I enrolled in the spring Walk to run program without any hesitation,” he said. “After the first class, I thought, ‘what have I gotten myself into?’ But since I had already paid for the class, I showed up again.”

Walk to Run coach Becky Meier convinced Steve to keep at it. He learned he could run and actually liked doing it, so he re-enrolled for the fall session. Next time around, coach Becky told him it was time to challenge his body to a 10K. Over the course of the next two years, Steve completed three half marathon training programs and ran his first half marathon in November 2019.

The supportive community is what keeps participants coming back for more. Newbies move up to the next level classes and join regular runners season after season, because they truly enjoy each other and celebrating little victories, like hitting the pavement in the rain, and bigger milestones, such as personal bests. The group uses a Facebook group to keep the virtual high-fives long after a running season is over.

Steve’s belief in the program led him to become a Walk to Run coach last fall.

“For some, running is a struggle. We create a fun experience so they can get over their hurdles. We wrap up the season with such accomplishment and celebration,” Steve beamed. “It’s such a well-designed program. We start as a group of people; we finish as a group of friends.”

The encouragement and coaching combine care with discipline. Homework assignments are given to the group to complete during the week. If you don’t post about your run, expect a phone call or reminder text. Coaches follow-up kindly but help keep you accountable to yourself. 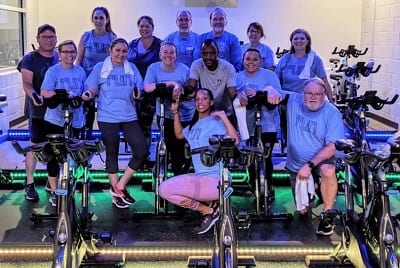 Walk to Run also provides cross-training opportunities for the group in other YMCA classes, such as Les Mills BodyPumpTM, cycling, yoga and small group training. “You can try it without feeling like you don’t know what you’re doing,” Steve said. He learned to love BodyPumpTM through this introduction to the class.

The Walk to Run program is coached by two YMCA staff who are able to sprint up and drop back through the group. “We spend time with each participant to check how they’re doing during the run. We’ll ask them about their day and what’s going on in their lives. How is their breathing, can they run and talk without difficulty, and can they finish out the route,” Steve explained. “We wear buffs and encourage 10 feet between runners.” 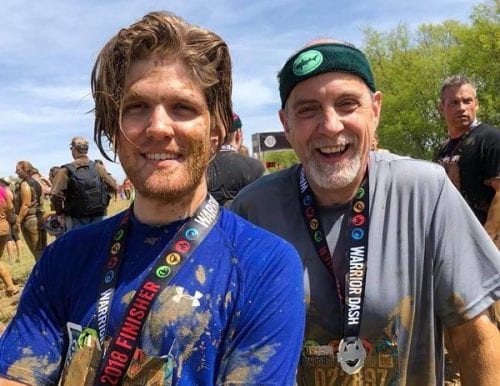 Since his running journey began, Steve has completed three Warrior Dash obstacle courses, dozens of 5Ks, four 10Ks, and one-half marathon. He is an ambassador for the RUN(317) race series and loves to share his passion for life with others. Steve recently coached a participant from his DPP class.

“Before I started this journey, I weighed 185 pounds and I currently weigh in at 158.” Steve shared, “she recognized me from the program and asked where all my weight went.” Steve’s answer – “it ran away!”

The Fishers Y running community brings people together from all walks of life to move in the same positive direction. There are programs for runners and walkers of all ages and levels. Are you interested in learning how to run? All you need is a great attitude and a pair of running shoes! The next session of Walk to Run begins at the Fishers YMCA on Saturday, September 12.

Registration is also now open for the 10th running of the Wishbone 5K. You can sign up for the live race on Thanksgiving morning, run or walk a 5K or 10K route on your own, or try the Choose 10 Challenge. All YMCA running programs are following guidelines from the state and local health departments.